America's most famous city, New York really does sell itself. With so much to see and do you'll never be able to experience it all in just one trip but some of the world-famous landmarks that you must visit include, the Empire State Building, Central Park, Times Square and Greenwich Village.

Take a large bite out of the Big Apple, there’s plenty to go around. Those looking for the ultimate city break should turn to New York, featured in countless films and TV productions, you may think you know everything about this amazing city, but if you explore further enough, you’ll discover a whole new world.

Of course, when vising New York you can’t pass up the chance to roam around Central Park, take in the fresh air while touring the grounds. Discover legendary landmarks, historical sights and learn all about the conservation. There are always exciting things happening in Central Park, with an entire yearly calendar listing all the enticing events. Spot the Alice in Wonderland sculpture, play a game of Chess in the Chess & Checkers House, visit John Lennon’s living memorial in the Strawberry Fields, ice skate the Wollman Rink or take a romantic stroll though Shakespeare Garden!

Located in the west side of Manhattan, bordered by Chelsea, the Meatpacking district is a 24-hour neighborhood with a wide range of restaurants and nightclubs set on the stone cobble streets. Foodies can revel at more amazing eateries in Chelsea Market with more than two dozen food vendors, try Japanese, Mexican, Cambodian, American street food and a range of International sweet favourites.

Families and couples alike can enjoy an afternoon around the Metropolitan Museum of Art, founded in 1870, this museum holds a collection of more than two million objects from Egyptian temples, American paintings, medieval armor and weapons and artistic forms from Europe, Turkey, Iran and Arab Islands. There are always fun things happening to keep you little ones busy, with an extensive calendar of events.

Get the authentic vibes of New York by trailing around Times Square, where the mesmerizing lights, yellow cabs, soaring skyscrapers project exactly what it’s like in the films! Catch a broadway show, shop until your hearts content and dine around gourmet and street food eateries.

What is the currency in New York?

How long does it take to fly to New York?

A flight from Birmingham International airport to New York City takes around 7 hours and 55 minutes.

What is the time difference in New York?

The UK is 5 hours ahead of New York City.

When is the best time to visit New York City?

From June to August you can expect sunnier weather compared to the rest of the year.

What language is spoken in New York? 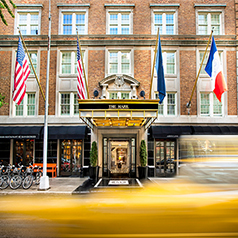 The Mark is a five-star hotel that strikes a fine balance between refined sophistication and sheer opulence. It offers luxurious accommodations and a bevy of world-class amenities in Manhattan’s Upper East Side. 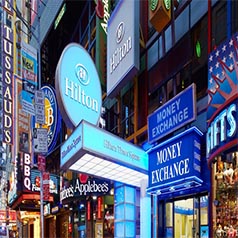 Planning an exciting trip to New York and want to soak up the vibrant atmosphere and the hustle and bustle of iconic Times Square? Book a room or suite at this outstanding 4 star Times Square hotel and you are sure to have the experience of a lifetime. 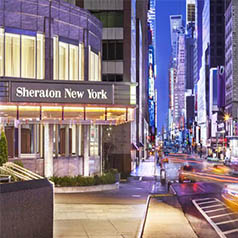 If you’re heading to the Big Apple and can’t wait to experience the vibrant lifestyle of Midtown Manhattan and the glitz and drama of Broadway, then the Sheraton New York Times Square Hotel is definitely the accommodation for you. 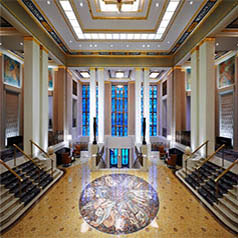 Discerning travelers jetting off to New York won’t find better accommodation than this iconic Park Avenue hotel, where luxurious lodgings, superlative hospitality and an array of 5 star facilities ensure your trip will go without a hitch. 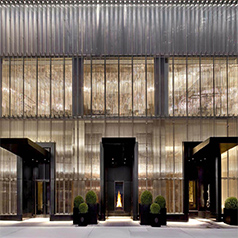 If you are heading to New York in the near future and are seeking a standout luxury Manhattan hotel then look no further than Baccarat Hotel and Residences, where Parisian sophistication meets New York style in a truly remarkable fusion. 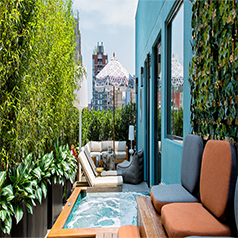 Matching flawless service with a buzzing energy that reflects its Downtown New York location, the Dream is a stylish boutique hotel with modern sensibilities.

New York has extremely varied weather seasons, enjoying anything from heat waves in the summer to heavy snow and ice during the winter, however for most people New York is seen as a romantic location during the wintery months and central park comes to life at such times. Summer is a lot warmer with the proposition of the temperature reaching close to 30 degreees. 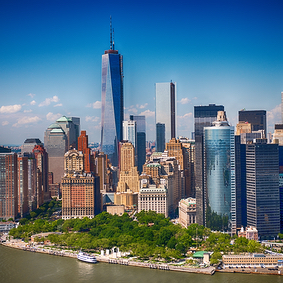