Everybody’s vision of a perfect tropical island holiday paradise with all the sea, land and sporting activities you could want and all the opportunities for rest and relaxation you could ask for. Say ‘Aloha’ to Hawaii.

An isolated archipelago in the Central Pacific forms the Hawaiian islands, known for their dramatic landscapes of rugged mountains and cliffs, waterfalls, tropical sceneries, sandy beaches and film set locations. A Hawaii holiday invites every type of traveller, from those who love sun kissed beaches, boutique shopping and a variety of culture, to those who seek adventure, scenic hiking and driving trails and excursions. Hawaii has a collective of wonderful tourist areas with luxury hotels, a lively nightlife and an array of exquisite restaurants.

Quaint towns, artisan centers and locally driven districts, Maui is a haven for the senses with pristine beaches, staggering sceneries, lush and sacred valleys and an incredible National Park for nature lovers. Discover the local town by night, where you’ll find locals amongst the tourists and a lively restaurant scene. Rent a car and drive the famed Hana route, set besides the islands edge with incredible sceneries through the winding and curved roads, this is an absolute must-do while in Maui.

Adventure seekers will love Oahu, known for pristine beaches with incredible surfing spots on Waikiki beach on the North shore. For some pretty interesting cultural experience, head down to Chinatown, set besides the majestic high-rise buildings in the island’s business district. Here you’ll find heritage sights such as Iolani Palace, King Kamehameha statue, Kawaiahao Church and the Aloha Tower. Between the sightseeing, grab yourself a bargain on the bustling markets, filled with stalls selling exotic fruits, seafood and herbal stalls.

Also named as the Garden Isle, Kauai offers sceneries of dramatic cliffs, big drop waterfalls and incredible helicopter hotspots. No wonder this enchanted island has become a popular location for hit Hollywood films. For an extraordinary day out, rent a car and drive through the Waimea Canyon route, enjoy scenic visions of the Waimea Canyon, a 10-mile long canyon that gives you the jaw-drop effect.

Hawaii’s Big Island is the youngest amongst the Hawaii archipelago, however it’s the largest of them all! There are so many things to do while on the Big Island, why not chase waterfalls on the Hamakua Coast, watch the sunset in the Volcanoes National Park, head to Waimea’s lush countryside or swim with the Manta Rays in Kona!

Head to Molokai for an idyllic Hawaii holiday with all the traditional trimmings. Putting itself on the map for being a hotspot with little tourists to occupy the isle, Molokai is the perfect place to island hop for a quiet afternoon away. En route to Molokai, take a relaxing ferry, this way you’ll spot the humpback whales.

Previously a pineapple plantation, Lanai Island is the base for relaxation and adventure. Romantic gestures range from picnic on the beaches to watching the sunset behind Phh Pehe, also known as Sweetheart Rock. If you’re looking for more action, head on a Munro Trail drive. The 487-meter elevation directs you though a rainforest that exudes with lush tropical plants, once you’re 4km into the trail you’ll get views of Maunalei gulch and its impressive canyons and neighbouring isle views of Maui and Molokai.

What is the currency in Hawaii?

Hawaii’s currency is the US Dollar.

How long does it take to fly to Hawaii from UK?

A flight from the UK to Los Angeles is around 11 hours. From Los Angeles to Honolulu International Airport can take around 5.5 hours, making a total flight time of around 16.5 hours.

What is the time difference in Hawaii?

The UK is 11 hours ahead of Hawaii.

When is the best time to visit Hawaii?

Hawaii’s summer months are between June-August.

What language is spoken in Hawaii?

Hawaiian and English are spoken in Hawaii.

Do I need a visa? 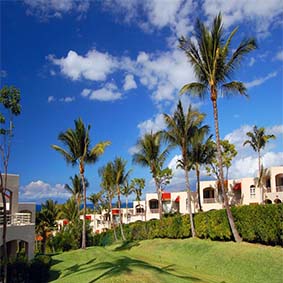 Palms at Wailea Maui by Outrigger

Sitting on the breath-taking shores of Maui and set amongst tropical gardens, the Palms at Wailea offers a Hawaiian getaway complete with luxurious accommodations and facilities. 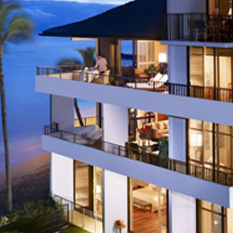 Of course, the unbeatable beachfront location is undoubtedly another factor! For the ultimate Hawaiian vacation book a suite at Halekulani now and enjoy a holiday of unparalleled luxury and serenity against a backdrop of waving palm fronds and golden sand. 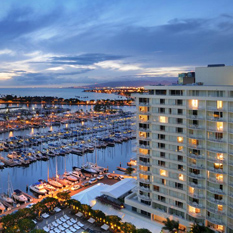 Soak up breath-taking views of the marina and the Pacific Ocean from your private balcony when you opt to spend a romantic Hawaiian vacation at The Modern Honolulu. 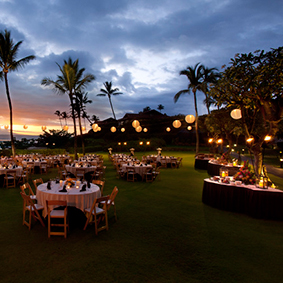 Resort is located upon or near a beach
From £370 Per night
Price based on June departures.

Whether you’re looking for a stunning oceanfront venue for your upcoming wedding or honeymoon, or scouting out the perfect 5 star resort to take the family for a seaside holiday, the Fairmont Kea Lani is guaranteed to fit the bill.

Hawaii has only the two seasons, the winter and summer seasons. From late June to Mid-October the average high for Hawaii is close to 30 degrees, with the winter slightly colder from 19 to 27 degrees. The average day has around 12 hours of sunshine in Hawaii.