Spend your days browsing the exclusive boutiques of Rodeo Drive or lazing upon the golden sands of Malibu or Santa Monica, and the nights in one of the world-class gourmet restaurants and then on to a choice of LA's famed nightclubs.

Loved by celebrities and film-makers alike, Los Angeles is known for its movie and TV industry, and with Hollywood close by and top attractions such as the Walk of Fame, Universal Studios and Madame Tussauds, this star-studded destination is sure to be a bucket list favourite.

Downtown LA offers world-class entertainment and sights, where families, couples and groups of friends can all find something that sparks interest. Music lovers can take a tour of Walt Disney Concert Hall or spend the afternoon at the Grammy Museum with interactive sound chambers.

Chinatown Central Plaza takes you to an entirely different continent, with authentic-looking architecture, you can spend the entire day exploring plazas, and attractions. The undiscovered Chinatown Walking Tour allows you to discover hidden temples, herbal shops, galleries and bargain shops through vibrant courtyards and alleyways,

Santa Monica Pier resembles somewhat of a seaside holiday, with friendly restaurants, shops and a sandy beach. There are plenty of things to do on and around the pier; the Pacific Parl features a nine-story Ferris wheel, an over-water mini golf course and a five-story roller coaster.

Universal Studios Hollywood takes you on a journey of behind the scenes of your favourite films and TV shows. Explore the wizardry world of Hogwarts and Hogsmeade, take a studio tour to learn how world-famous movies are made, come face to face with King Kong in the most intense 3D experience ever and step into the animated world of The Simpsons.

Extraordinary views can be seen from Griffith Observatory, open to the general public and free entry, you’ll get to see all of downtown LA and the Hollywood sign through a telescope.

What is the currency in Los Angeles?

How long does it take to fly to Los Angeles?

A flight from London to Los Angeles can take around 11 hours and 20 minutes.

What is the time difference in Los Angeles?

When is the best time to visit Los Angeles?

Between the months of March to May and September to November crowds are less and humid is low. Rainfall exists between January and February.

What language is spoken in Los Angeles? 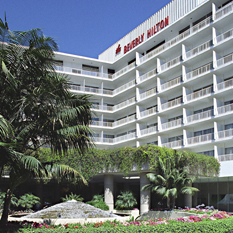 From £295 Per Night
Price based staying in a standard room.

If the glitz and glamour of Beverley Hills appeals to you, for your next holiday why not choose to spend it in one of the city’s most iconic hotels – the Beverley Hilton? 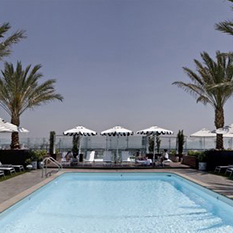 From £450 Per Night
Price based staying in a London Suite.

This lavish retreat is within easy reach of Sunset and Santa Monica Boulevards and is a perfect base from which to explore the best that LA has to offer. 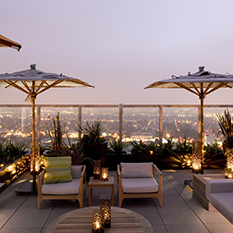 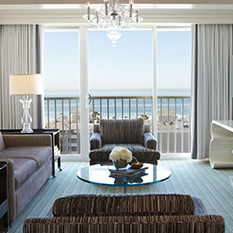 Resort is located upon or near a beach
From £375 Per Night
Price based on staying in a Partial Ocean View room.

If you want to indulge in a classy California beach holiday book a suite at this 5 star hotel and enjoy its impeccable service and world-class amenities. 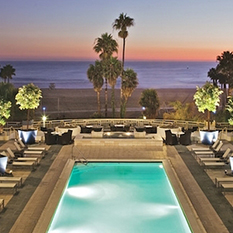 Resort is located upon or near a beach
From £350 Per Night
Price based staying in a standard room.

This beautiful 5-star hotel is also perfect for guests that simply wish to relax and soak in all the luxuries available to them. 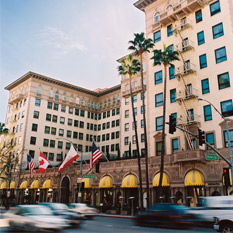 From £500 Per Night
Price based staying in a Signature Room.

The Beverly Wilshire, a hotel unlike any other is located in the heart of Beverly Hills, just steps away from…

Los Angeles experiences over 300 days of beaming West Coast sunshine each year, making it a firm favourite for beach lovers with pretty much guaranteed sun. January and February are the rainiest of most months but from apart from that Los Angeles is blessed with gorgeous weather albeit it overly humid on occasions.