There are so many reasons to visit the small Nordic nation of Iceland. Undoubtedly top of the list is its incredible scenery, which includes dramatic volcanoes – such as that famous one nobody can pronounce – its desolate lava fields, black sand beaches and spurting geysers. Then, of course, there are the Aurora Borealis, also known as the Northern Lights, which can be easily seen during the winter months. Be sure to check out our selection of hotels in Iceland, some of which serve as the ideal base from which to view this breath-taking phenomenon.

Keen horse riders are guaranteed to love a visit to this island nation, thanks to Iceland’s very own native breed of horse. They may be small but they are tough, hardy, and very comfortable to ride thanks to their possession of a 4th gait, known as the tolt, which is famous for being very smooth and easy to sit to. What better way is there to view Iceland’s spectacular scenery than from the back of a horse?

You may not know it but Iceland also offers incredible scuba diving opportunities, giving you the chance to dive between two continents. Visitors with an Open Water qualification should head to the country’s Þingvellir National Park, which straddles the gap between the Eurasian and North American plates. Slip on your gear and immerse yourself in the stunningly clear waters of Lake Þingvellir, with its dramatic drop-offs and rock formations.

Some of the country’s other natural wonders you won’t want to miss include its awe-inspiring volcanoes, caves and hot springs, many of which you can either climb, delve into, or both. To experience the latter either head to the highly popular Blue Lagoon pools, or, if you are fortunate, you may even have some geothermal pools at your hotel so you won’t have far to travel to enjoy their healing benefits. You can also opt for a Super Jeep tour of the countryside, or head out onto the open water from Reykjavik or Husavik on a whale or dolphin watching excursion.

During your stay in the land of ice and fire you should also be sure to try some of its culinary delicacies, though some may require more bravery than others; such as smoked puffin and fermented shark. Be sure to wash your meal down with a bottle of locally brewed white ale known as Einstok.

What is the currency in Iceland?

The currency used in Iceland is the krone/krona.

How long does it take to fly to Iceland?

A non-stop flight from London to Reykjavik can vary in duration from 2 hrs to 3 hrs 15 minutes.

What is the time difference in Iceland?

Iceland is 1 hour behind the UK.

When is the best time to visit Iceland?

It depends why you are going. To experience the midnight sun, head to the country during the summer months. For hiking, go in July and August. But for the Aurora Borealis, be sure to go during the months of February, March, September and October.

What language is spoken in Iceland?

Icelandic is spoken in Iceland. 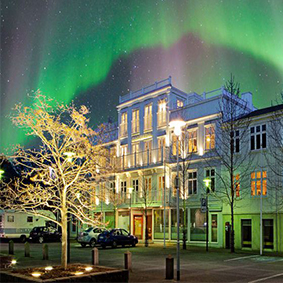 If you are planning on visiting Reykjavik and can’t wait to experience the city’s many cultural gems while enjoying your stay in comfort and luxury, look no further than Kvosin Downtown Hotel. 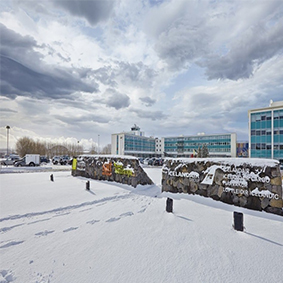 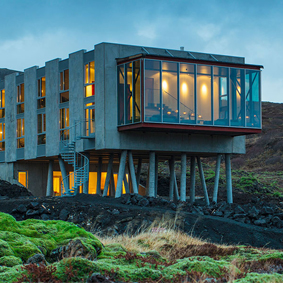 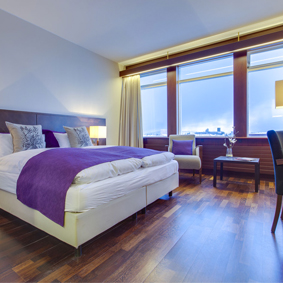 Renowned for its gourmet fare, spectacular vistas of the mountains and glaciers, indulgent wellness services and so much more, Radisson Blu saga Hotel serves as your quintessential base for exploring Reykjavik. 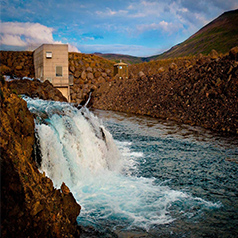 If your dream is to escape to a place of unspoiled beauty and wonder, where you can reconnect with nature while staying in a unique luxury resort, then Hotel Husafell is the perfect getaway for you. 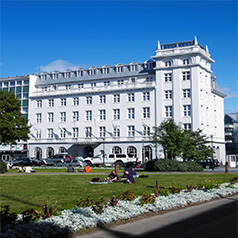 If you can’t wait to experience the bright lights and historic sights of Reykjavik then you’re sure to love staying at Hotel Borg, a luxury Reykjavik resort that has become one of the capital’s iconic architectural gems.

The weather in Iceland is quite unpredictable and you can even get four seasons in a day.  Midnight sun and warmer temperatures make summer the best seasons to visit as the winter can be quite cold. However,  to spot the Northern lights clear skies and dark nights are needed, visiting between February and October is probably the best time to visit Iceland.

With an average temperature of 11°C (52°F) July is the hottest month in Reykjavik. But if you want to visit in the winter, the coldest time is January at 0°C (32°F). The wettest month is January with an average of 50mm of rain. The best month to swim in the sea is in July when the average sea temperature is 11°C (53°F). So whatever time of year you visit be sure to bring your swimsuit as there are geothermal pools that you can enjoy too.